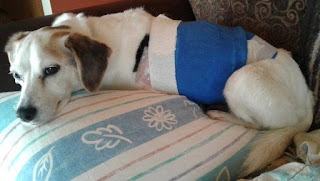 Electronic containment systems - the devices that either have wires that you bury in the ground or are wireless and transmit to a collar you put on your dog - work through the use of electric shock.

You put the wires around the perimeter of your house and when your dog comes too close to those wires usually the collar will make a beep or have a vibration and if the dog keeps going the collar will then emit an electric shock to tell the dog to back off so that he does not leave your property.

That is how things should go when everything is working as you want it to - but there are a lot of things that can go wrong.  And I am going to lay out a few of those things.

There was a newspaper article in the Chronicle Herald about a dog In Eastern Passage that was attacked by a coyote - it was very serious - the poor dog almost died - it is very serious, and really it's still very touch and go - hopefully the poor dog Daisy is  going to pull through - I've put the article at the end of this post so you can read it.  She had an electronic containment collar on her so that she could have free run of her back yard - and this is scenario #1 of why these collars don't work - they keep the dog in - but they don't keep anything OUT of your yard.

Coyotes, other dogs, humans who want to hurt your dog - anything can get into your yard because there's no physical fence there for them to get over.  Kids could come in and tease and harm your dog - whatever it is - your dog has no ability to protect themselves.

Scenario #3 - your dog has gone through the perimeter and shocked themselves - do you think they are going to want to shock themselves in order to get back into the yard?  Hell no - they are just going to keep running and go for the walk about of their lives!

One of my best friends runs the Nova Scotia Lost Dog Network and she is always going on about all the dogs that are found that have shock collars on them.

I have a former co-worker who lost her two dogs TWICE because of an Invisible Fence - and the second time she lost them - only one of them came back - the second one was never found - which is just the saddest thing in the world - that was the most beautiful dog and she must have had a really awful death in the woods somewhere.  So unnecessary.

Scenario #4 - the thing about these containment systems is that the collars have to be on the dog 24 hours a day 365 days a year - with other types of shock/e-collars they are only on the dog while you are training with them.  So the dog has to always be uncomfortable and have the prongs of the collar jutting into their neck - and if the collar malfunctions and the dog is being buzzed all the time - how do you know?  Your dog could be being shocked 24 hours a day and you wouldn't know.  That would be truly horrific.

Thank you to Eileen and Dogs for this - I'm just going to quote her below - I talk about the Five Freedoms on this website and Eileen talks about how electronic containment systems breaks three of them:

“Freedom” for your Dog?

The marketing materials of the electronic fence companies often feature photos and videos of dogs romping on huge, lush green lawns without a care in the world. They promise “freedom” for your dog, over and over again. We (USA folks in particular) are practically wired to have a positive response to that word. But frankly, is a dog alone in a yard, with an automated electronic shock collar strapped tightly around its neck, really free?

It’s a myth that [electronic fences] provide dogs with more freedom. In fact, these devices violate three of five freedoms that define adequate welfare for animals: • Freedom from pain, injury, and disease • Freedom to express normal behavior • Freedom from fear and distress–Karen Overall, Manual of Clinical Behavioral Medicine for Dogs and Cats, 2013

I know that many, many people who install electronic containment fences have their dogs’ best interests in mind. The salespeople have told them the collars don’t really hurt the dog. They may figure in any case that a little “tap” once in a while is worth it for their dog’s safety. I hope I’ve shown you here that the pain is probably not trivial, and the safety is definitely illusory.

Here is the Chronicle Herald article: 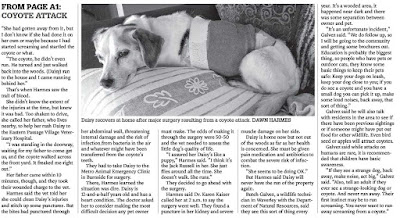 Welcome to You Would be Shocked


Hierarchy of a dog's needs
What are the positions of Different rescues and the NS SPCA in Nova Scotia?


Science Based Trainers in Nova Scotia


What is "balanced training and What is Science Based Training ?"

Quotes from animal behaviourists around the world

“Electric shock has no place in modern dog training and behavior management. It is never necessary, and is inhumane and side effect-laden. I know of no valid argument for the continued sale of these devices.” - Jean Donaldson, founder and principal instructor, The Academy for Dog Trainers and author of The Culture Clash.

“It is my honor to join the PPG in the movement to stop the use of shock collars for training and behavior and participate in the campaign to raise awareness of the devastating effects on canine health and well-being as well as the damage to the relationship between dogs and their people." -Linda Tellington-Jones Ph.D. (Hons), developer of the Tellington TTouch Equine Awareness Method (TTEAM®) and Tellington TTouchTM.

“I’ve witnessed first-hand the destructive power of shock collars in dog training. Shock collar and electric fence companies will tell you they’re not harmful when used ‘correctly,’ but this is false. What they don’t tell you about is the damage these devices can do, both to the human/canine bond and to a dog’s emotional stability. The ineffectiveness of these tools in terms of emotional shutdown is common and research has also effectively shown that using shock to train dogs is ultimately harmful and should be avoided at all costs.” - Victoria Stilwell, dog behavior expert and trainer, host and presenter of Animal Planet’s It’s Me or the Dog.

"Cruelty can't stand the spotlight. And, abuse must be countered head on. Dogs need all the voices they can get. We are their lifeline, their oxygen, and they are totally dependent on our goodwill and for us to work selflessly and tirelessly on their behalf.” - Renowned ethologist Marc Bekoff, Ph.D., University of Colorado, author of The Animals’ Agenda: Freedom, Compassion, and Coexistence in the Human Age (marcbekoff.com)

“It is morally reprehensible to use shock to control the behavior of the sentient, sensitive beings we call our best friends. Shock collars work because they hurt, and it is absolutely possible to train dogs successfully and effectively without using them. If you don’t have to hurt and frighten your dog in the name of training, why on earth would you?” - Pat Miller CBCC-KA CPDT-KA, director, Peaceable Paws Trainer Academies.

“The behaviors for which people wish to use shock in dogs are those that annoy humans. These behaviors are either signals or nonspeciﬁc signs of underlying distress. The question should be, are we doing harm when we use shock to extinguish behaviors, some of which may be normal? If one is considering the mechanism of cellular learning, the answer must be yes.” - Karen L. OverallMA VMD Ph.D. DACVB, editor-in-chief, Journal of Veterinary Behavior: Clinical Applications and Research.

“I’m shocked to learn about shock collars and I support the drive to ban them.” Dr. David SuzukiPh.D., award-winning scientist, environmentalist and recipient of the Order of Canada.

“Anxious dogs freeze or flee when startled. These are natural responses. The more anxious a dog is, the easier it is to scare the dog into immobility. Immobility is not the same as calm or happy or obedient. Immobility can mean being frozen in fear. Aversive corrections and punishment-based training methods startle dogs into immobility. Harsh verbal corrections, choke collars, prong collars and shock collars are all positive punishment strategies – positive in that they add an undesirable consequence in order to get the dog to “stop” – with the shock collar being the most evil villain of all. Good people who care about dogs still fall victim to the lie that this collar does NOT hurt dogs. It does. It hurts both physically and emotionally. If it didn’t hurt enough to scare the dog, then it wouldn’t stop the behavior. The seemingly innocent beep (also called a tone) is threatening – as threatening as pointing a gun at someone, but stopping short of pulling the trigger. The beep may not cause physical pain, but it still causes fear and is not in the best emotional interest of our dogs. Our anxious dogs deserve empathy and compassion, not shock or the threat of being shocked. Please help by taking shock off the table.” - Theresa L. DePorter DVM MRCVS DECAWBM DACVB, veterinary behaviorist.